I am a documentary photographer, not a photojournalist. I like and respect most of the old school photojournalism but, unless it deals with a true major event, I think that objective reportage is somehow boring… What intrigues me, instead, is the photographer’s view on facts: That’s why I always try to document things in a more personal and intimate way. As a consequence, my interest in photography is split between social reportage and aesthetic research into the medium itself; so, instead of just “finding” random subject matter, I prefer to create images based on my emotional states, which -if I’m fortunate- are able to generate thought and wonder. My work chronicles the exploration of my own identity: Each subject in my photographs is meant to represent me, for I feel that to a real photographer a photo is first and foremost the image of an idea.

I work only in black and white. No exceptions. I don’t enjoy the banality of Color, which I find superfluous to the true needs of fundamental investigation; and I’m not interested into the “realistic view of the subject”: Nowadays, that can be achieved even by a Baboon with a $30 point-and-shoot! The vast majority of color photographs lack force of originality, for they reproduce images too similar to the world in motion which the eye is so accustomed to see; therefore I think that keeping my images monochromatic makes them majestically heavy and paradoxically closer to reality, because black and white are the true colors of photography and to me they symbolize the alternatives of hope and despair to which mankind is forever subjected.

I operate in the analog domain. I’m convinced that film-based imagery is ineffably nearer to the way the brain perceives a scene, rather than the way the eye sees it. Digital photos may seem (arguably) more accurate, but the film ones render a more harmonious “whole” that evokes the way the scene “felt” or how it was mentally discerned. I like to interpret life creating images obtained through hard work and passionate vision, thus I have no plans to start taking pictures with a digital camera: I feel that the entire process of exposing and developing film adds another layer to my perception of reality.

I’m aware that my pictures may not change the reality of the people I photograph, but I’d be happy if they just brought some vision and understandings to a specific situation, making someone feel uplifted and positive.

All that said, writing about everything I see becomes simply consequential, and making books is the only way I want to show my work: A book is a thing that can withstand the test of time, and publishing one feels like closing a chapter of my life. 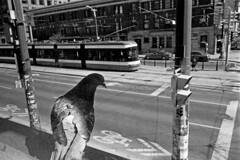